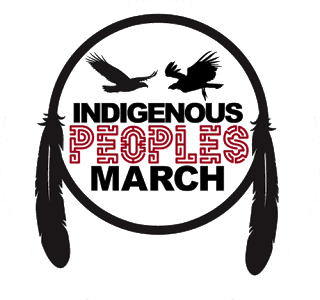 Reminder:: ALL ROADS LEAD TO DC :: It’s happening! On January 18, 2019 the people of the nation, of all indigenous backgrounds & beyond, will march in honor of indigenous people from around the world. Join the movement by marching in solidarity with us. . #indigenouspeoplesmarch
#indigenouspeoplesmovement

WASHINGTON — On Friday, January 18, 2019 Indigenous peoples from around the globe will convene in Washington, D.C. for the first annual Indigenous Peoples March. (from Native News online)
The main demonstration is set to take place on Friday, January 18, 2019, starting at the Bureau of Indian Affairs on 1849 C Street NW, Washington, D.C. at 8 a.m. local time.
The march aims to raise awareness on issues that affect Indigenous peoples through the world. From missing and murdered Indigenous women to border control, police brutality to protecting Indigenous lands, the march is set to unite thousands of people on various issues affecting Indigenous peoples.
Organizers have said they expect at least 5,000 people to attend including groups from Australia, Guatemala, Papua New Guinea, Canada and various Tribal Nations from the United States. All are encouraged to attend.
Here’s what you need to know:
Where and when will the march take place?
Permit requests have recently been approved for the march to be held along C Street near the United States Department of Interior Building beginning at 8 AM on Friday, January 19, 2019. After opening prayer and remarks at the Department of the Interior, attendees will march East on C Street NW, South on 18th Street NW crossing Constitution Avenue NW to JFK Hockey Field on the National Mall.
Organizers of the march requested a permit to hold a rally on the National Mall at JFK Hockey Field (1964 Independence Avenue SW) from 11 a.m. to 5 p.m.
What is the route?
Pedestrian entrances to the march are located along the route of the march which begins at the Bureau of Indian Affairs at 1849 C Street NW, Washington, D.C. and will continue East on C Street NW towards the National Mall at 1964 Independence Avenue SW, Washington, D.C.
The Indigenous Peoples March is funded by various tribal groups and individuals and will include “speakers, musical performers, tribal elders and prayer,” according to organizers. Portable restrooms will be available within the National Mall.
Can I bring signs?
Banners and signs are welcome at the rally, but according to most permits, you won’t be allowed to carry signs that are mounted on wood, metal sticks, or posts for safety reasons. Also not allowed in the march are pets (unless you have a service or guide animal).
What should I wear for the weather?
Winter is colder no matter the location in the United States, Washington included. The best advice is to check weather forecasts that morning for the best prediction of what to wear and whether or not to bring an umbrella. Organizers recommend to bring blankets and portable chairs for the rally.
Will there be food at the rally?
The rally is set to last several hours at the JFK Hockey Field on the National Mall. The closest metro stop is Archives-Navy Memorial, which is a few blocks away. Organizers are aiming to raise funds to provide catering for attendees, but it is best to prepare food options while on the National Mall.
How else can I get involved in the cause?
Before: If you would like to volunteer with the Indigenous Peoples March, you can fill out their registration form HERE.
During: While attending the march and rally you can share your opinions and pictures on social media using the official Indigenous Peoples March hashtags, which are #IPMDC19 and #WHYIMARCH.
After: Volunteer with or donate to the Indigenous Peoples March organization at Indigenous Peoples March or SPONSOR the Indigenous Peoples Movement.
You can also contact your state representatives and members of Congress to show your support of Indigenous peoples.
What if I’m out of town?
For those that cannot travel to Washington, D.C. and wish to host or participate in a local march for January 18, 2019, please click Find a solidarity march to find mobilizations around the country that you can join. If you’re interested in planning your own solidarity march, please host a solidarity march with the “Click To Host” button on the map. A representative from our field team will contact you within 72 hours with more information on how to get started. You will receive weekly updates, and all the tools you will need to make it a success. The Women’s March will have “Sister marches” you may encourage those chapters to also be in Solidarity with Indigenous Peoples March.
If you would like to donate to help us make this march a success you can visit:
Fundraising – Indigenous Peoples March
*We also accept WEPAY or PAYPAL for donations via “indigenouspeoplesmovement@gmail.com”
For any and all information please visit the Indigenous Peoples March’s official website at https://indigenouspeoplesmovement.com/.